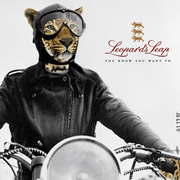 While paging through the SA Times this week, I was struck by the image of a leopard on a motorcycle, fully leathered, wearing goggles and a look of concentration that said “this isn’t as easy without training wheels.”

When I calmed down and wiped the tears from my eyes, I read the headline “Abandon Preconceived Ideas. Leap.”

The ad is for a South African wine label called Leopard’s Leap. Although my initial reaction was to slate such advertising tom-foolery, I can’t help but praise the tenacity of this campaign. It’s not often that wine ads stay in mind much after turning the page. This definitely stuck.

As it turns out, the ad wasn’t even a one-off. On following the prompt to leopards-leap.com (it was a slow day), I came across an entire desktop wallpaper campaign of this amusingly gormless character, partaking in activities such as golfing in a suit with an umbrella to joy-riding in a convertible with a naughty looking (sadly human) woman. Each layout with same tagline: You know you want to. How absolutely bizarre.

As the boys at BBH have said time after time, “When the world zigs, zag.” It looks like these guys zagged about 5000 nautical miles off. But it’s zagging none-the-less, and one can’t fault a client who’s willing to go that far.

Hey, the next time I’m in an off-license at 1am I might just be drunk enough to want to live the leopard’s dream and take that leap.