Inside the fashion world of Jean Paul Gaultier 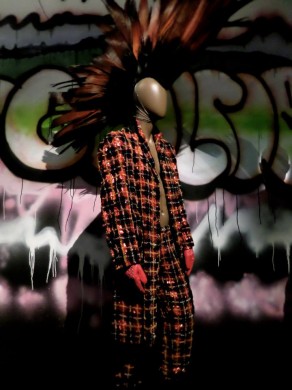 “I didn’t want the show to be like a funeral,” says Gaultier, as he introduces his latest exhibition for The Barbican. Often dubbed the enfant terrible of fashion, Gaultier’s work is anything but funereal.

What he’s really getting at, is that most exhibitions are posthumous celebrations of an artist’s achievements. We expect to be taken on a journey from the early stages of a career, through to the slow deterioration of health and eventual death. Breaking convention, then, The Barbican is hosting the French couturier’s first major exhibition while he’s still alive. 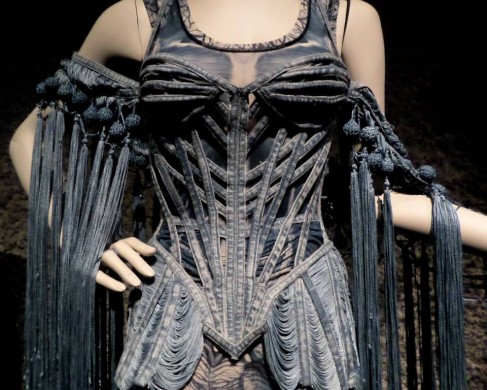 We’ve worked closely with Europe’s largest multi-arts centre on their classical music campaigns. Having studied fashion textiles, I was eager to take a non work-related trip to see the Centre’s latest exhibition, The Fashion World of Jean Paul Gaultier: From the Sidewalk to the Catwalk.

The exhibition is split into eight sections. Each offers an entirely different theme, yet all 165 pieces remain distinctively “Gaultier.” From nautical stripes to cone bras and corsets, sci-fi to British punk and animalistic hybrids, the show is a celebration of diversity and multi-ethnic personalities. Even if you’re not the biggest fan of fashion, the interactive mannequins will animate your experience. 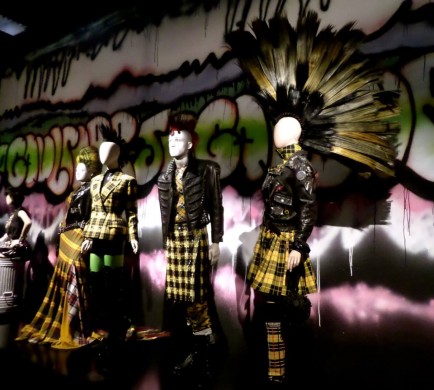 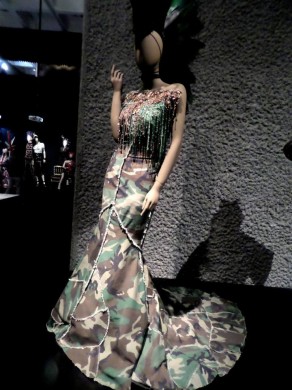 Turn the corner, and the next section is a stark contrast. Brought up by strong women, Gaultier does not subscribe to the myth of the weaker sex. Here, the room is filled with pieces that were inspired by prostitutes on the street corners of Paris and the British punk movement. A black cigarette holder is enticingly positioned above bright red knee socks. Soft, elegant fabrics are dismissed in favour of hard, black leather jackets and ripped denim. The mannequins sport tribal headdresses and bold tartan mini-skirts. Military garments become formal attire. Like the peachy silks on entrance, this section exudes sensuality, but this sensuality is an empowered androgyny and sense of rebellion. Gaultier was influenced by the punk movement’s anti-materialist principles

Gaultier says he was inspired by this collection when travelling to London in the 1970s. Influenced by the punk movement’s non-conformist fashion and anti-materialist principles, what spoke to the couturier was “The raw side of punk, with its mohawk haircuts, almost tribal makeup, allusions to sex [and] mixing of genders and materials.” 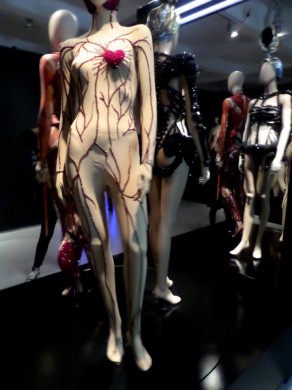 Gaultier continually reinterprets what he sees as signs of the imprisoned female body. His corsets strip away what he claims to be the restrictive elements of fashion and expose a primordial quality. These infamous corsets are intended to be symbols of sexual freedom. For this reason, Gaultier wanted strong female icons such as Grace Jones and Dita Von Teese to wear them. Significantly, the corsets are not restricted to women. Referring back to dandies and English military men of the nineteenth century, Gaultier gives men the opportunity to wear the corsets once again. 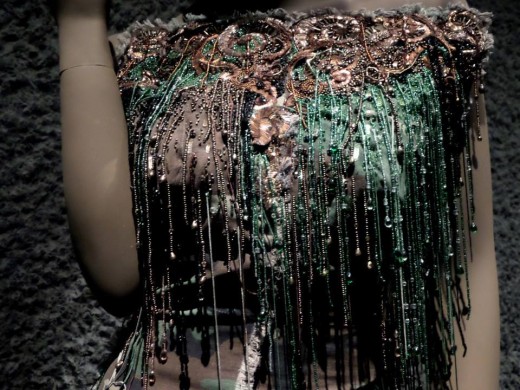 Gaultier’s attention to detail is staggering

The exhibition is open until 9pm every night, and I’d definitely recommend an evening viewing. There’s no sense of rush that you might get during the day. Even if fashion isn’t your bag, the couturier’s attention to detail regarding the placement of each bead or sequin is staggering. For Gaultier, “ Past, present, here, elsewhere, masculine, feminine, remarkable [and] humdrum” all coexist.  The Fashion World of Jean Paul Gaultier: From the Sidewalk to the Catwalk is a celebration of humanity in all of its extremes.