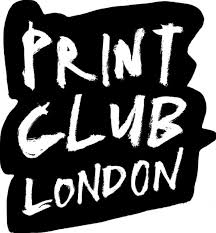 Inky yet inspiring, our recent trip to Print Club London left us pretty hyped up about screen printing. With Christmas fast approaching and screen prints proving a popular gift choice, here’s a bit more information about the technique that became Andy Warhol’s signature style. What’s more, we show you how to make your own prints at home. 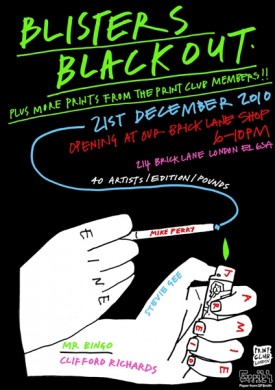 So, what is it? Screen printing is “the process of using woven mesh to support an ink-blocking stencil to produce a desired image”. None-the-wiser? Nor were we before our venture to Dalston-based Print Club London. Established in 2007 and run by Kate and Fred Higginson alongside illustrator and Creative Director Rose Stallard, this screen printing studio produces prints from some of the biggest artists on the scene at the moment. The trio curate one of the UK’s largest poster shows, “Blisters” – 2013 saw nearly 3000 people burst through the doors of MC Motors in Dalston. Print Club have also been involved with the Somerset House Film Festival and held an exhibition of film posters at the venue. The video below shows the Print Club artists talking about the process.

With word on the grapevine spreading, we were keen to jump on the screen printing bandwagon. Print Club’s Corporate Workshops offer a team day out learning the ropes and producing your own print. Clients include Channel4, Sony and Selfridges… (and us, of course).  Before the workshop, we were told to simply arrive with an A4 PDF image. Evidently, this wasn’t sufficient for the Firedog design team.

We were keen to jump on the screen printing bandwagon 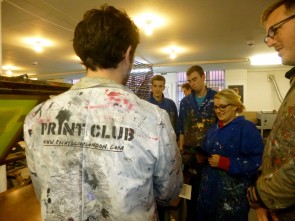 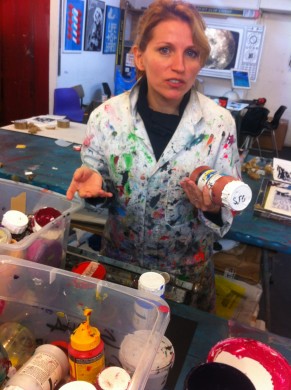 Once completely satisfied with our artwork (this may have taken a while), Fred took us to the dark room and taught us how to coat our screens with emulsion. Emulsifying the screens leaves everything other than the chosen image blocked out. When the screens had dried, we printed our images onto acetate and, using a high-powered lightbox, burnt the image through the emulsion and onto the screen. Next, it was time to print. Cue for much umming and ahhing regarding those all-important colour choices…After these decisions had been made, Fred’s talented team showed us that applying just the right amount of pressure to a squeegee held at 45 degrees results in the perfect print. With our prints dry and nicely wrapped up, we left Dalston chuffed with our artwork. 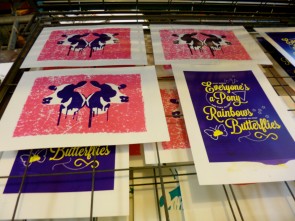 Despite all the fun we had at Print Club, screen printing doesn’t have to take place in one of these studios. It’s possible to try the technique out for yourself at home with as little as an old picture frame, some polyester mesh, inks and cardboard. Staple polyester mesh across a picture frame and you have a screen: stiff cardboard becomes a makeshift squeegee. First, take a piece of paper and draw a design that can easily be cut out of the paper with a craft knife. Next, take your screen and mask off around the edges of the underside so that when you lay your stencil paper on top there is no mesh showing around the edges. Firmly place your screen over your t-shirt or fabric and lay your paper stencil on it where you want the design to be. Place the screen on top of the paper stencil, blob a tablespoon of ink in a line at the top edge of your screen. Hold the screen firmly down with one hand, place the squeegee (or cardboard) above the ink and pull it down the screen at a 45 degree angle. Lift it up carefully and admire your design! There are numerous ways to screen print from home but for more information on this technique, see this article: http://www.theguardian.com/lifeandstyle/2010/may/11/how-to-screen-print-tshirts-at-home
Our screen prints aimed to reinvigorate the room with the lighter side of life.

You may have a set project in mind for your prints: ours were destined for the Hoxton Hotel. A week after screen printing, we hosted an “Art Therapy” client event at the venue. While we are by no means experts in the practice of Art Therapy, we took the term in its literal sense. At times, the daily grind of London life can leave us all in need of therapy. Consequently, our screen prints aimed to reinvigorate the room with the lighter side of life. Tasked with producing images that make us happy, the result spanned Friesian cows, quotes from Dr Zeus, games consoles and the Glastonbury Cider Bus. 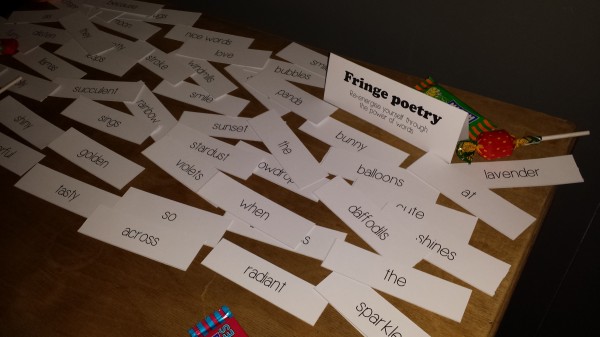 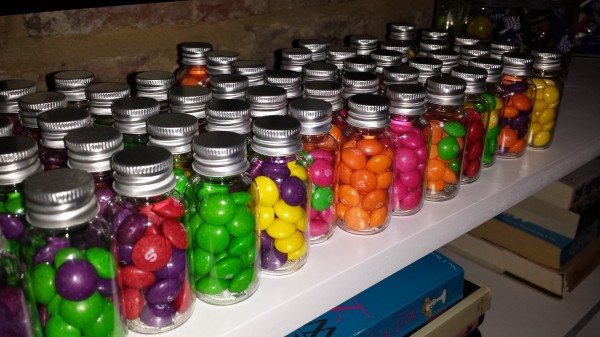 We weren’t about to compare our work to Warhol, though, so kept a few artistic antics up our sleeve.  Cara and Sam became doctors for the night and ran Rorschach ink blot test sessions. Clients would create their own ink blot print, get their London-themed condition diagnosed and receive a bottle of “medication” in the form of Skittles. What’s more, our “Pin the beard on the Hipster” game (we are based in Shoreditch, after all) resulted in many drunken disoriented clients, and the giant doodle board proved a great space for artistic expression. The “make a sentence” game displaying solely fluffy, cheerful words encouraged a positive attitude, as did the compliments box filled with flatteries. At the end of the evening, we held a draw and clients left with our framed screen prints. 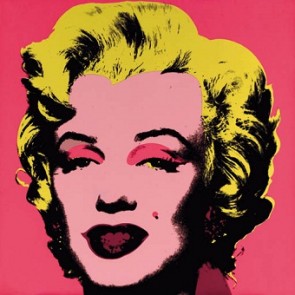 During the event, many people were interested in the process of screen printing, so we thought a brief overview would be appealing. While screen printing is becoming increasingly popular today, it wasn’t always that way. Despite first appearing in China as early as 900 AD, the technique was only introduced to Western Europe in the late 18th Century.

Traditionally, the screens consist of silk threads and the technique is termed “silkscreen printing”. As silk mesh was difficult to come by for much of the 18th Century, though, uptake was slow. Today, polyester mesh is more commonly used – the process is also referred to as serigraphy and screen printing for this reason.

Breakthrough came in 1910 when Charles Peter, Roy Beck and Edward Owens experimented with a chemical called actintic light, commercialising screen printing. Credit is generally given to Andy Warhol for popularising screen printing with his 1962 depiction of Marilyn Monroe. This technique proceeded to become Warhol’s signature style and millions of prints have been sold worldwide since. Other famous screen printers include Rob Ryan, French artist Blexbolex and up-and-coming Shoreditch-based Mr Bingo.

Rob Ryan may now be most famous for his detailed paper cut outs but views himself first and foremost as a fine artist. His work has featured in Vogue, Elle and Stylist, to name a few. While Warhol’s silkscreen artwork largely retains the form of prints, Rob Ryan’s work shows how screen prints make effective cards. The artist has been commissioned to design numerous Christmas cards over the years.

Multi-award winning Blexbolex is also reputed for his screen print designs. The Frenchman has produced screen prints for over three decades – his visual storytellings are commonly found in children’s books and graphic novels. The prints reflect the artist’s experimental approach to blending hand-drawn illustration with commercial printing techniques and book production.

Here in Shoreditch, it’s Mr Bingo who has caused a screen printing stir. Published by Penguin, the artist’s new book Hate Mail is a collection of screen printed postcards that deliver insults like “Dear David, you are the grey cloud over my life” and “Dear Chris, you will never be as good as Peter Andre.” When asked where the idea came from, Mr Bingo says:  “It’s funny to be insulted. And post is usually dull. Or bad news.”  Apparently, people relish slander; the artist’s work now includes collaborations with the BBC, Orange and Microsoft. 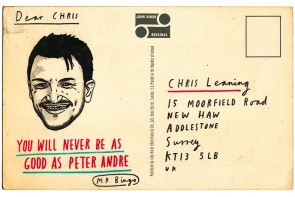 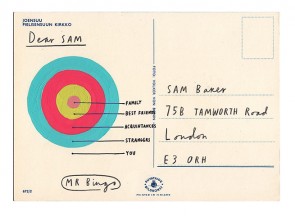 Other screen print gifts in recent years have been found at Banksy’s Santa’s Ghetto. In 2006, the artist transformed Clark’s shoe shop into a squat art installation. Speaking about the event, Banksy says: “I felt the spirit of Christmas was being lost. It was becoming increasingly uncommercialised and more and more to do with religion so we decided to open our own shop and sell pointless stuff you didn’t need.” One screen print transforms the Hansel and Gretel fairytale – the wicked witch is replaced by Michael Jackson attempting to entice children with a candy stick. 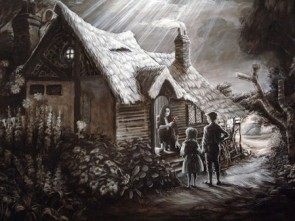 Previous Article All we want for Christmas: where we’re heading this December
Next Article E-cards: saving our planet but destroying our souls?