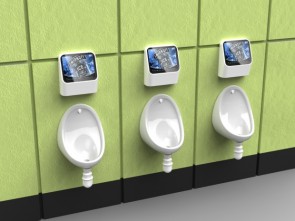 Every urinal in the gents has a 12in LCD screen that’s hooked up to a (hands-free) console which features the game ‘Off the Piste’. Drinkers masterfully steer their pee from left to right, under the watch of infra-red sensors, to navigate a skier down the slope, gaining points for taking out penguins! At the end of the game, players are encouraged to post their scores via mobile to Twitter and to a live leader board so they can compete with their mates.

The concept successfully turns the time most men spend staring at the urinal wall from a boring interlude into an engaging experience which offers brands pre-game, in-game and post-game promotional opportunities. It also addresses the issue that it is extreamly difficult for brands to engage a young male audience whilst they’re out socializing.
As a result it’s not surprising that a host of other bars want in: the volume needed means users drink more, stay for longer and a quarter of the advertising slots on the consoles are allocated to promoting the venue’s own products.

More games are now in the pipeline, including a multiple-choice quiz, Clever Dick, and an app called Artsplash, which sees budding artists create Jackson Pollock-esque pictures!