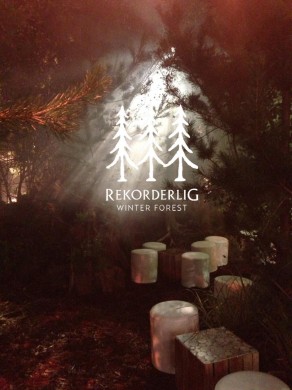 Friday 26th October brought the opening of the Rekorderlig Pop-Up

Forest Bar on Brick Lane, a temporary takeover of the Brickhouse venue in the old Truman Brewery, promoting their fruity Swedish cider. My friends happened to have a spare ticket so, being a fan of cider (although less so of forests) I agreed to go.

We were advised to turn up between 6 and 8 so we headed there straight after work. Unsure what the dress code was for an indoor forest, we were a mix of work dresses and cosy jumpers, hobbling over the cobbles in high heels. Totally unnecessary as everyone else had the good sense to wear trainers. We hadn’t realised how literally the term ‘forest’ would be taken.

On arriving we were greeted by a number of PR girls backed by heavy duty security which seemed a little over the top for the handful of us in there. But then it was early and the opening night had been extremely busy. The FoH took our names and coats (free of charge cloakroom – nice touch!) and introduced us to our ‘server’. We were able to get seats and chose some tucked away under a few branches next to a pine tree. 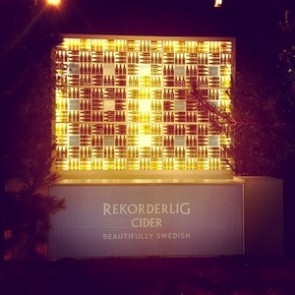 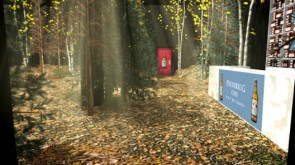 The whole set up was beautifully done. The ‘forest’ smelled fresh, the air had an outdoor chill (seriously – I had to fetch my jacket back out of the cloakroom) and our very unnecessary heels got stuck in the leaves and mud covering the ground. The little stools and tables scattered around provided some seating space but as the venue filled people resorted to standing and eventually taking a seat among the leaves. The music was… interesting at best. It felt as though the DJs were trying to cater for every music taste possible which made the mix slightly jarring. 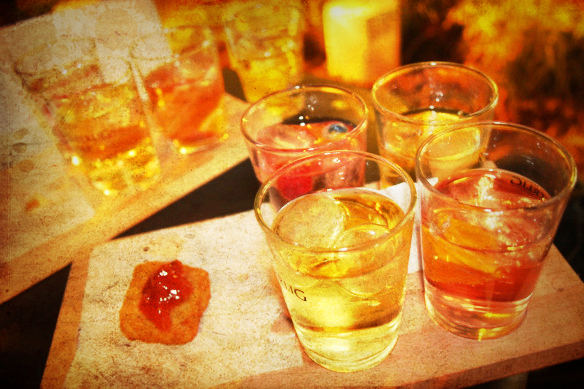 mini cider samples and a cheesy croquette topped with chutney!

Tickets were £5 and for your money you got a nicely presented wooden tray of cider samples and snacks, all served in the ‘Swedish outdoors’. I think Rekorderlig got this promotion spot on, recognizing the wants and needs of the target audience. We got more than we paid for, and the subsequent drinks were reasonably priced (£4.50/500ml). The effort that had been put into designing and setting everything up was clear to see, I would have paid the £5 just to go in and have a look around! The only downside was that the venue was a little cold (I know, I know, it was supposed to a ‘forest’) and the music wasn’t really in line with the general feel of the evening. All in all however, a Rekorderlig convert, and pretty impressed!