We go to the dogs for fifth birthday 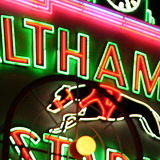 In celebration of firedog’s fifth birthday, we decided to drag our creative butts up to the center of cultural london that is the Walthamstow Stadium Greyhound Racing Track (aka, goin’ ta the daaaags).

Oh my hat, what an enlightening experience. I’ve been there before mind, it’s just the memories were brought back in full technicolour after last night.

Dog racing is just one of those things really that has managed to cling on to society’s trouser hem in our newly sanitised and web optimised world.

Being in a low-tech environment, watching a few razor-sharp pooches hurtle their bones around a dirt track, is a cause for much refreshment (of which there was plenty indeedy)

We had a little wager to add to the excitement too.

A crisp tenner was handed out to each of the firedog punters with the promise of a prize to the lucky (or careful) person that could manage to hold on to it without squandering it all, never mind capitalising on investments well laid.

George was the champion of the evening who managed to walk away with the prize after securing a twelve pound tally, two up from the original. Others, such as yours truly, having thrown it all away in a 10p multiple trifecta betting frenzy. I sincerely hope to go to the dogs again soon… 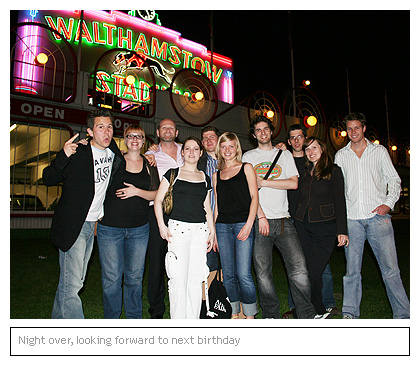