With World Cup hype dominating the headlines, we consider the stadiums that hold these momentous events. Throughout history, stadiums have become platforms from which to spread propaganda or rally for social injustice. Just look at Hitler’s 1936 Berlin Olympics or Bob Geldof’s Live Aid efforts. Stadiums have been sites of tragedy, as well as catalysts for change. Spanning almost a century and covering all corners of the globe, we pick the most memorable stadium moments of all time.

In America, Super Bowl Sunday is one of the most talked about events of the year. It holds records for being the most watched broadcast in US television history and has the most expensive advertising airtime. What an opportune moment, then, for Justin Timberlake to expose Janet Jackon’s breast to the world. The 2004 Texas Super Bowl is the one that everyone remembers: the event that was subsequently named “Nipplegate”, formed the inspiration for YouTube, and launched Facebook. It even coined the term “wardrobe malfunction.”

Nipplegate wasn’t the only memorable stadium instance that involved clothing. In 1995, Nelson Mandela shocked the world as he walked onto the rugby World Cup final wearing a Springbok jersey. 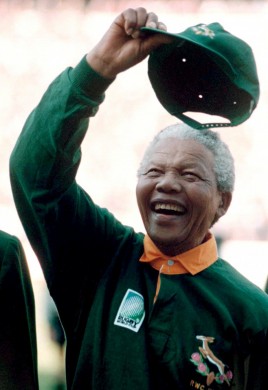 “You’d never again get such a great man creating that moment”At the time, this piece of clothing – and the game of rugby itself – was a symbol of deep racial division. For white people, rugby reflected pride and identity, and for the black population it was a symbol of apartheid. The moment when South Africa’s first black president wore this garment in front of a mostly white crowd of 62,000 people went down in history as one of the strongest attempts to unite nations.

Foreign journalist, John Carlin, stated: “I’ve never come across a more politically significant, emotional … moment than what was witnessed at the World Cup.” The then All Blacks coach, Laurie Mains, said afterwards: “The atmosphere in that ground could not possibly be repeated, ever, because you’d never again get such a great moment in history and such a great man creating that moment.” 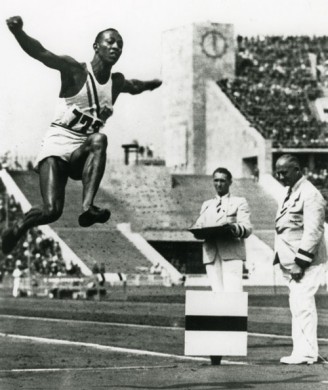 Owens made history in the 1936 Games

The 1936 Olympic Games is another example of when stadiums have become sites for promoting ethnic diversity. Winning four gold medals, Jesse Owens crushed Hitler’s hopes of showcasing the superiority of the Aryan race.  While Hitler criticised the U.S. for stooping to using “non-humans”, an overwhelming majority of German fans treated Owens like a hero. The moment is generally remembered as the greatest sporting snub in history, but Owens maintained that it was Franklin Roosevelt who snubbed him and Hitler in fact shook his hand. Irrespective of who snubbed who, this moment captured sport in its truest sense: a competition based on aptitude, rather than ethnic background. Jesse Owens crushed Hitler’s hopes 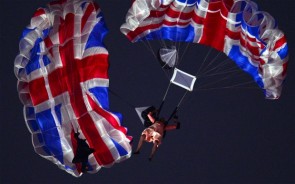 007 parachutes into the stadium…

Danny Boyle’s 2012 Olympic Games Opening Ceremony was an ambitious attempt to unite a nation; it left many Brits choked up with pride.

For many people, the highlight of the evening was Daniel Craig’s five minute James Bond video with the Queen and her corgis, followed by parachuting into the stadium.

Journalist Gordan Rayner described Boyle’s show as “a love letter to his homeland that left 65,000 spectators chocking with pride.” From Winnie the Pooh to Bradley Wiggins and Shakespeare to the Sex Pistols, Boyle didn’t leave a stone unturned.

Geldof wanted to tackle the Ethiopian famine through music

More recently, Coldplay started using “Xylobands” at their concerts with the intention of creating a sense of community between the fans and the artist. The wristbands use ultra-low-power microcontrollers to receive and process wireless signals, which then trigger the wristband’s LEDs to light up in sync with Coldplay’s music. This means that during certain points of the concerts, the stadium is illuminated with multicoloured twinkling lights. Chris Martin claims that the band loves seeing up to 40,000 people lit up in this way, but also admits that most of the money made on the band’s 2012 tour was spent on the wristbands.

Excess to this degree on the music scene didn’t begin with Coldplay. Stadium rock, sometimes known as Arena rock, started with the Beatles playing several concerts in NYC’s Shea Stadium in 1965.  Having outgrown the standard concert halls, many popular rock bands needed somewhere bigger. The solution was to book these bands into sports stadiums and other open air arenas. The original stadium rock bands even wrote music with a stadium audience in mind – take Queen’s “We Will Rock You”, for example. Wembley’s Greatest Event? Muse’s 2007 tour 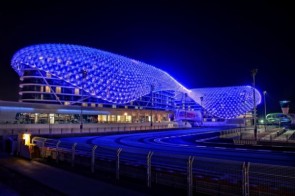 Tilke has an impressive track record of F1 stadium design

Following this vein brings us to an event that was borne from a desire to embody the free love and liberal spirit of the 60s: The Altamont Speedway Free Festival. The Festival’s organisers dreamed of an event that would be the antithesis of authoritative power, and the Rolling Stones wanted the conclusion of their U.S. tour to be remembered as the West Coast equivalent of Woodstock. Largely improvised, the Festival didn’t even have a definite venue arranged days before the event. In exchange for $500 of beer, several dozen members of the Hells Angels motorcycle gang acted as informal security staff. Events spiralled out of control, and the concert is now remembered as the moment the 60s came to a violent end. The Altamont Speedway Free Festival wanted to embody the spirit of the 60s

From endings to beginnings, Formula 1 is taking off more than ever before. In the last decade alone, F1 has expanded into eight new countries. All are in Asia, and all were designed by one man: Hermann Tilke. Perhaps the most visually striking and advanced of these is the Yas Marina circuit, the venue for the Abu Dhabi Grand Prix. Driver Rubens Barrichello stated: “the venue looks sensational and is quite a challenging drive, which makes it a lot more fun for the drivers.” Tilke’s designs mark a new entry point to millions of new fans and are helping to push F1 forwards on a global scale.

Stadium designers usually get their fair share of critical acclaim, which is why it’s pretty rare when they decline attending the stadium’s opening ceremony.  Even more unusual is a refusal to have any involvement in the event the stadium was intended for. During the 2008 Beijing Olympics, Ai Weiwei, China’s most dissident artist, openly regretted designing The Bird’s Nest. He dismissed his creation as “a stage for a political party to advertise its glory to the world”, and voiced his belief that it went against the Olympic spirit of fair competition. Ai Weiwei regretted designing The Bird’s Nest 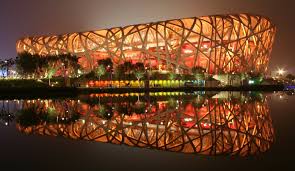 Structurally, stadiums are projects that allow world-renowned designers to make their mark on a landscape. Beyond the brick and mortar, though, these constructions are also a window into the human spirit. Stadiums have united people through shared experiences and common interests; they have equally reflected intense friction between public consensus and governmental power. Above all, these imposing structures create finite moments in time that expose our multi-faceted human nature.