From Sewerditch to Shoreditch: past, present and future

The bells of St Clements chimed “oranges and lemons” and those of Old Bailey tolled “when will you pay me?” While the evasive great bell of Bow did not know, those of Shoreditch gave a definite answer: “When I grow rich.” 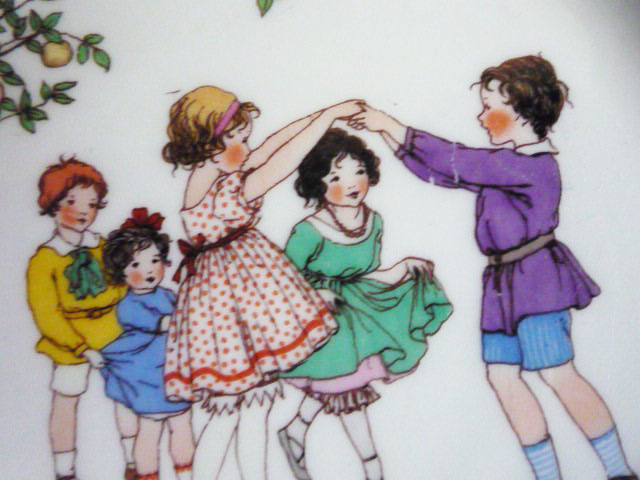 In the 18th and 19th centuries, the prospect of an affluent Shoreditch proved a feat of the imagination. Steeped in poverty, crime and prostitution, this product of city overspill was an area to avoid. Today, though, Shoreditch constitutes a popular and fashionable part of London, bursting with boutiques, art galleries and bars. Based in Hoxton Square, Firedog delved further into the area’s past to draw parallels with its present. 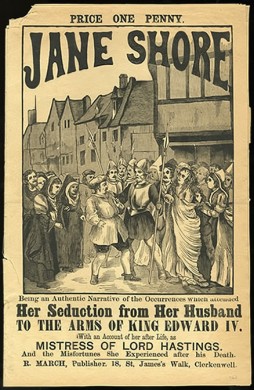 The exact origins of Shoreditch’s etymology remain debateable. Tradition dictates that the name derives from Jane Shore, the captivatingly beautiful mistress of Edward IV. Worn out with poverty and hunger, the “Rose of London” came to a miserable end and perished in a ditch. Unfortunately, the poetic tragedy of this story does not concur with the reality. Jane Shore died at the ripe old age of 82, having lived the remainder of her life in bourgeois respectability. A more accurate origin can be traced to the Saxon roots of “Sewerditch”, a stream which ran east of St Leonards to Holywell Lane. At the time, a sewer was an artificial watercourse; Sewerditch constituted an area of marshy land on the periphery of London. As a result, it became a refuge from the jurisdiction of the City, a place to dabble in a bit of illicit behaviour. Compare this to today’s Shoreditch, and things haven’t radically changed. In 2011, CHU’s anagram “Sodtherich” stickers were plastered around London, revealing the audacious attitudes of the past to have carried through to the present day.

Shoreditch became a refuge to dabble in a bit of illicit behaviour. Compare this to today, and things haven’t radically changed. 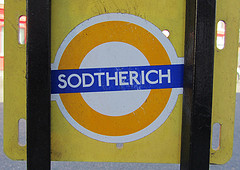 Shoreditch has long been an area of London reputed for artistic creativity. When the City banned all play acting in 1576, James Burbage built the first playhouse in England, “The Theatre”, on Curtain Road. Shoreditch proved the perfect location for Shakespeare’s Romeo and Juliet to be first performed. In the Victorian times, Shoreditch’s inhabitants were immensely proud of the Britannia Theatre in Hoxton. Its manager, Sara Lane, achieved such popularity she gained the nickname as the “Queen of Hoxton”. While the Victorian times saw “Public Houses galore”, today, trendy bar and club “The Queen of Hoxton” on Curtain Road perhaps commemorates this hugely influential woman. 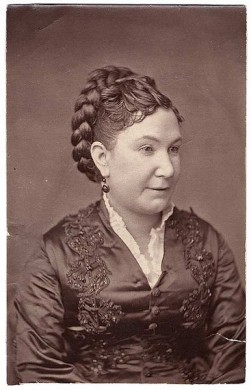 By the early nineteenth century, Shoreditch was the capital of craftsmanship of a different kind: that of the furniture trade. The opening of the Regents Canal in 1820 made timber transportation cheaper and easier. Near enough to trade with the City, yet far enough to maintain lower rents, Shoreditch proved the ideal location for this trading to take place. The trade proved so successful that by 1861, about 30 percent of all London furniture makers worked in the East End. In 1922, 43/44 Hoxton Square – now partly the Firedog studio – was in fact documented as being a chair store. Unfortunately, the rapid decline of this trade at the end of the century left the area mired in squalor.A while later, these derelict warehouses proved attractive to some. Reinvigorated by the Young British Artist movement, the early 1990s brought a much-needed change to Shoreditch. With the arrival of student artists such as Damien Hirst and Tracey Emin, the area acquired a new edge. Shoreditch became a place where artists could buy cheap studio space to exhibit their work. It’s largely thanks to these artists that Shoreditch retains this reputation.

Reinvigorated by the Young British Artist movement, the early 1990s brought a much-needed change to Shoreditch. 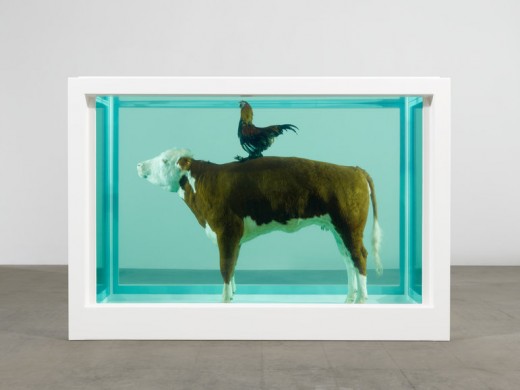 Renowned for its creative streak, Shoreditch’s walls are awash with vibrant street art. This is so prominent, in fact, that the area runs street art tours, pinpointing the best current work on display. As the landscape is constantly changing and artists continually flock to the area, there’s always something different to see. The area has become an open air gallery for some of the world’s best street artists to exhibit their work. This international mix includes Belgian Street artist ROA, German MadC, Australian Reka, and American Shepard Fairey, to name just a few. While you may be familiar with some of the pieces, here’s a quick breakdown of who’s who: Shoreditch’s walls are awash with vibrant street art.

If it’s an animal, it’s probably ROA. This world-famous street artist is known for masking mundane facades with gigantic hedgehogs, rabbits and stalks. ROA’s popularity with the locals came to light in 2010, as the Hackney council threatened to paint over his 3.5m high rabbit. The campaign launched to save “Roa Rabbit” overpowered the council’s plans, though. 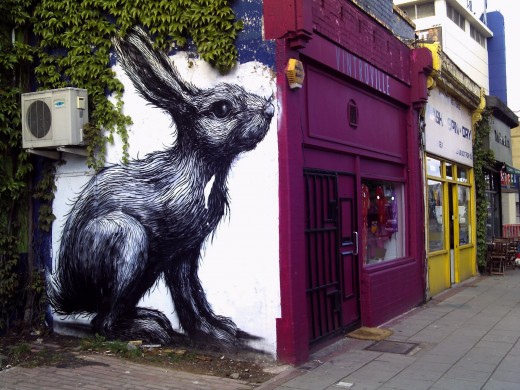 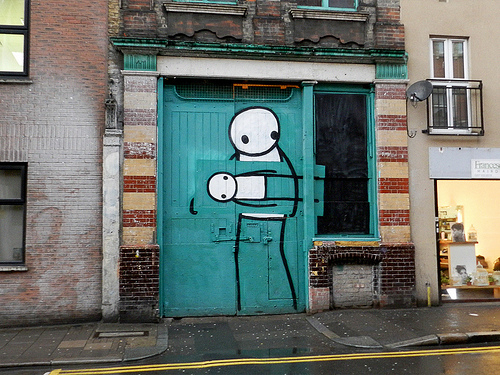 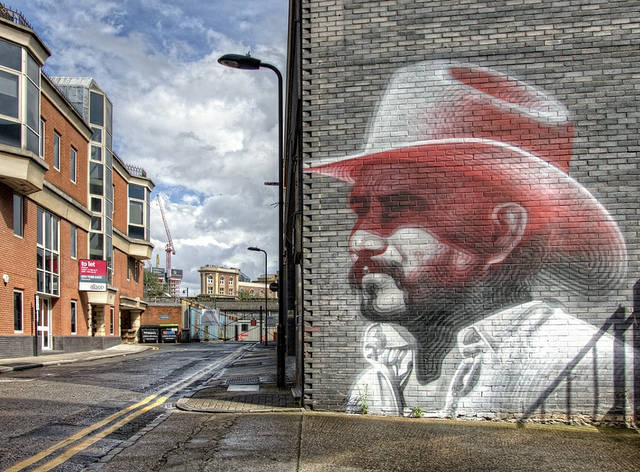 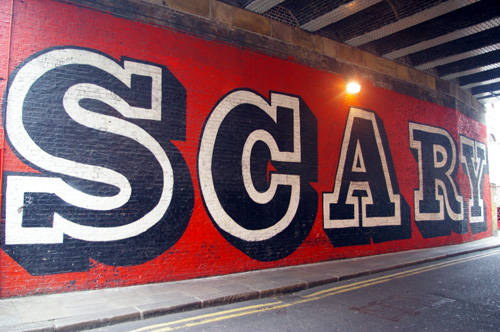 Another notorious artist is Stik, who (surprisingly) paints stick figure-like people. Check out his work on Pitfield Street: we think it’s one of his best.  El Mac’s iconic cowboy, affectionately nicknamed the “Hoxton Cowboy” has also been hugely popular with residents in recent years. Big words guy Ben Eine is also pretty recognisable; he covers Shoreditch’s walls with words like “Scary” on a dark underpass by Rivington Street and the controversial “Vandalism” on Holywell Lane. Fame hit Eine’s name as David Cameron presented Obama with one of his pieces in 2010, and the artist has since customised Louis Vuitton’s pop-up concession in Selfridges. Shepard Fairley can also be added to the long list of world-renowned artists whose work is prominent in Shoreditch. Creator of “Obey Giant” and the Barack Obama 2008 “Hope” poster, Fairley hit Shoreditch in 2012 with “This decade only, shoplifters welcome.” 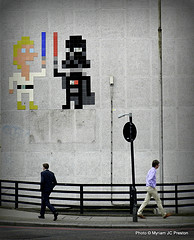 Melbourne-based James Reka’s mural on Chance Street, “Fallen Angel”, certainly got people talking in summer 2013. Reka is recognisable for his use of bold colours, strong lines and the surrealist feel to his work. Next to his “Fallen Angel”, Berlin-based MadC’s brightly painted mural transforms Chance Street into a hot spot for street art. Lastly, any Invader addition to Shoreditch’s walls is sure to cause a buzz. In summer 2013, the French urban artist got residents hot under the collar with a new mosaic street piece featuring Luke Skywalker and Darth Vader battling it out on the NCP carpark building.

If this isn’t enough of a creative fix, stroll down to the end of Shoreditch High Street, and you’ll reach The Boxpark. Opened in 2011, the world’s first pop-up mall offers a carefully selected community of niche brands.  Cliff wrote an article when it opened: https://firedog.co.uk/thinking-space/news-opinions/the-dog-speaks/no-more-west-end-xmas-shopping-boredom/ 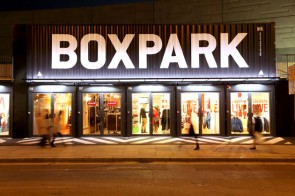 Five minutes further on, there’s Old Spitalfields Market, one of London’s top markets. Its eclectic range offers fashion, arts and crafts and food. And speaking of food, London’s famed curry mile, Brick Lane, is also just a 10 minute walk from Hoxton Square. Home to immigrants for hundreds of years and just minutes from the bustling financial district, Brick Lane is a hub of eccentricity; its diverse stores range from vintage clothing to quirky eateries. The gritty, urban vibe here is definitely comparable to that of Shoreditch. 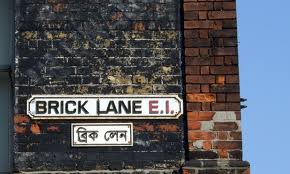 Brick Lane is a hub of eccentricity

Exploring the effects of modernisation and city expansion on Shoreditch opens a whole new can of worms; one we will only leave semi-ajar. It is nonetheless worth sparing a moment’s thought to the area’s future. From rags to riches, is Shoreditch being spoilt? Significantly, the area is no longer considered to be on the periphery of central London. When Shoreditch High Street station opened in April 2010, it was immediately classed as a Zone 1 destination, despite not being adjacent to any other Zone 1 stations. Since the opening of the Overground, the area has become more accessible than ever before. Furthermore, the strategically-placed Holiday Inn Express on Old Street advocates “Hoxton Square’s cutting-edge bars and nightclubs”, presenting the area as an attractive tourist trap. Exiting the hotel, do guests turn right towards Old Street tube station to reach the “traditional” tourist sites of the City? Or, is a left turn to join the masses of like-minded tourists clutching their vintage Polaroid cameras on a Shoreditch street art tour now considered more culturally fulfilling? 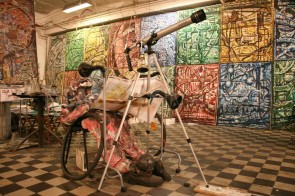 The fact that Shoreditch will change is by no means a revelation. In what way, though? Drawing comparisons from other European cities gives a rough prediction. Take Berlin, for example: the famous Tacheles arts centre encapsulates the detrimental effects of modernisation. Considered a cultural staple of the city, this building was recently sold to HSH Nordbank. Its plans? To tear the building down in replacement for a more lucrative structure, like a hotel. Will the same happen to Shoreditch? Are the shiny corporate buildings that keep popping up an ominous forewarning that Shoreditch’s individuality will soon be swallowed up entirely, to be spat out in the shape of a generic bureaucratic stamp?

Only time will tell. If this does happen, maybe Stik’s regurgitating figures will be preserved in some ironic sense, to be looked upon with a fond, nostalgic smile. For the moment, though, as Elizabeth the 1st declared herself to be “much pleased with the Shoreditch bells” in the 16th Century, the area continues to enthral us in the 21st. 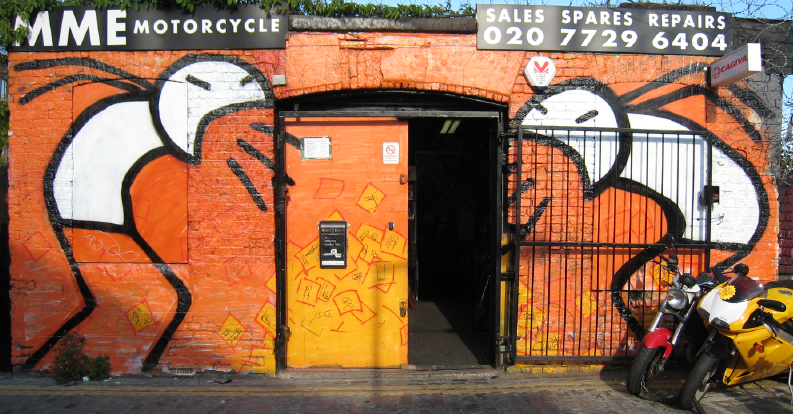 Previous Article Making logic magical for the masses
Next Article “So light up the fire, and let the flame burn”: Firedog on fireworks night