“So light up the fire, and let the flame burn”: Firedog on fireworks night 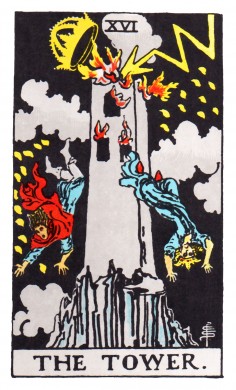 Pure spirit, passion and vitality: these are the attributes given to the fire Tarot cards. As they complement Firedog’s core values of adventure, energy and warmth, we thought a topical article would be apt. To get you in the mood this 5th of November, Firedog explores traditional significations of fire and scouts out the biggest Bonfire Night celebrations in the UK.

Often associated with the deities of trickery and chaos, fire can be an uncontrollable element. Reflecting this is Loki, the unruly Norge god of chaos. Dubbed “The Trickster” and affiliated with fire, this mythological character continually challenged the gods, preventing them from becoming complacent. Consequently, Loki represents a strong character, unafraid of confronting established norms. The change he evokes as a result of this disruptive behaviour can be beneficial for society.

Dubbed “The Trickster” and affiliated with fire, Loki continually challenged the gods 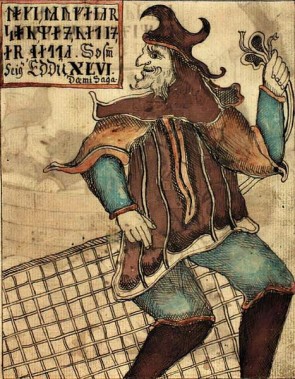 Another mythological figure to note is Hephaestus, the Greek god of the forge and fire. Using a volcano as his forge, Hephaestus produced all of the weapons for the gods in Olympus. While the reference to war evidently represents destruction and anger, there is a duality to fire. The element is equally linked to manufacture – it is a means of creation. Regardless of whether or not what is produced benefits humankind, the sheer force of fire is undeniable.

Pagan traditions adhere to this power as they clearly outline fire’s ability to cleanse and increase fertility. In Slavic mythology, Svarog, meaning “bright and clear” represented the spirit of fire. Amongst Slavic Pagan fire rituals is jumping over the bonfire on the Ivan Kupala Day to bring good luck. Furthermore, the Pagan fire festival of Beltane was a celebration of spring – of fertility, new life, and the awakening of the earth after a long winter.Pagan traditions outline fire’s ability to cleanse and increase fertility.

Fire is thus often associated with re-birth. Most notably, the phoenix is a bird that obtains new life by rising from the ashes of its predecessor. This sacred “royal bird” with its beautiful plumage is cyclically reborn. The bird was said to regenerate when wounded by a foe, constituting a symbol of strength or immortality. Another example of a magical, fantastical creature associated with fire is a salamander. Significantly, Leonardo da Vinci associates the salamander’s shedding of its skin with virtue as he notes: “The salamander, which renews its scaly skin in the fire – for virtue.” So, while fire can indeed be a destructive force, its purifying qualities are certainly not limited to Pagan tradition.

The relationship between fire and cycles can be linked to annual celebrations involving fire. The small town of Lewes in Sussex holds the biggest bonfire night celebration in the UK. This market town saw 17 Protestant martyrs burnt at the stake during the period of 1555 to 1557. Because of this, the 17 burning crosses that are lit to commemorate these martyrs form a significant component to the night. The bonfire night celebrations in Lewes thus aim to remember history; they are not solely for the public’s benefit. There are six societies that put on five separate parades and firework displays: each society creates a topical “tableau” which highlights the problem the common man has with the powers that be. As representations of recent figures of events are blown up, this can inevitably lead to controversy. Examples of this are 2001’s effigy of Osama Bin Laden and the Firle Bonfire Society’s choice of a gypsy caravan effigy in 2003. Lewes in Sussex holds the biggest bonfire night celebration in the UK. 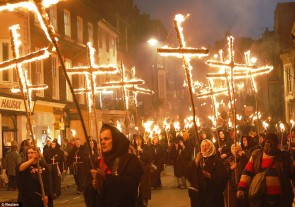 Another small town that’s transformed on the 5th of November is Ottery St Mary; local residents famously run up and down its streets with flaming barrels strapped to their backs. Originally, it is thought that this event may have originated as a means of warding off evil spirits around the time of Halloween, once again alluding to the strength of fire. The town of Bridgwater in Somerset also lights up on the 5th of November, where thousands flock to experience a night of festivities. The Bridgwater Carnival in fact dates back to 1605, the same year the Gunpowder Plot was unveiled. A coincidence? Of course not. While Guy Fawkes remains the character most associated with the plot to blow up the Houses of Parliament, the instigator was Jesuit priest Robert Parsons, who lived close to Bridgwater. South West towns were predominantly Protestant at the time, so the Carnival originally started as a celebration of Fawkes and Parsons’ failure. In Ottery St Mary, residents run up and down the streets with flaming barrels strapped to their backs.

This brings us to the original reason for bonfire night: Guy Fawkes himself. While the history of this night has been drummed into us since primary school, this man’s personality has perhaps been underplayed. Author Antonia Fraser describes Fawkes as “a man of action…capable of intelligent argument as well as physical endurance.” Discontent with the world around him, Fawkes encapsulated the key qualities of fire as he risked his life in the hope of a revolution, demonstrating passion, spirit and vitality. While playing with fire may indeed lead to getting burned, it’s the excitement of taking risks that continually entices us.

Previous Article From Sewerditch to Shoreditch: past, present and future
Next Article The ultimate guide to creative design agency roles