Heroes come and go, but legends are forever! 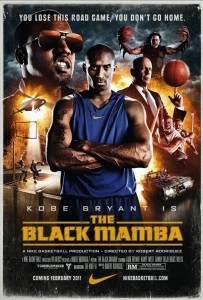 Nike have a new advert out for Nike Basketball.

Nike have a new film out for Nike Basketball. they don’t seem to have held back in any aspect of the making of this ad, firstly its over 5 minutes long, secondly, its directed by Robert Rodriguez (director of Sin City and From Dusk Till Dawn) and stars Kobe Bryant,  Bruce Willis,  Danny Trejo and the “lovable” Kayne West.

Cue explosions, helicopters, mirrored sunglasses and of course, Nike trainers (its an ad after all)

I do love how in recent years how Nike have really upped their game in their ad campaigns and are getting bigger and bigger. Cant wait to see how they cover the eagerly awaiting Chess sessions in the Olympic games 2012.

Previous Article Arcade Fire Poster
Next Article Have you summed us up yet?