Firedog celebrated its new studios with an ‘Autumn Rendezvous’ held on the 20th of October…. 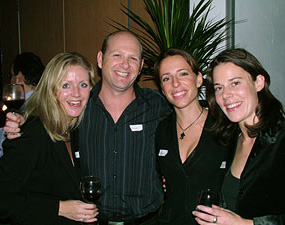 Firedog celebrated its new studios with an ‘Autumn Rendezvous’ held on the 20th of October.
Firedog invited clients, key suppliers and guests to a cheese and wine function in our new studio at 32 Lexington Street in Hoxton.
An informal wine tasting was the theme for our first ‘Rendezvous’ which Firedog plans to run every few months. Kevin Gallagher and Julia Holbrook from SA Wines Online were on hand to offer an introduction to each of the four wines that were sampled.
The evening ended up being more of a wine appreciation evening rather than a wine tasting with a good time had by all. We look forward to seeing those of you who couldn’t make it at the next event.
Watch this space for details!