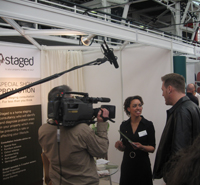 It’s 17:56 and we’re knackered! Physically and literally beaten. Why you might ask? Isn’t that par for the course? The deadlines and briefs, torturing yourself for creative idea after creative idea? Well, yes it is, but today was different. Let me tell you why! Today was like none other. We were involved in a TV show that’s airing on Channel 5 in the autumn. Due to copyright and confidentiality agreements that are in place I’m not allowed to tell you the name of the show or the celebrity who’s in charge. I can only tell you that it follows a similar format to the renowned The Apprentice TV show that’s currently on air (gripping stuff, you have to see it!).

OK, so what’s the yarn? Well, we were selected as one of a series of challenges that a team of 4 final contestants have to achieve in order to win the competition. The final four contestants have been split into two teams of two and they’ve been given a £900 budget and a blank 5m x 2m exhibition stand shell at the Home and Property Life Exhibition (www.homeandpropertylife.co.uk) taking place at the Islington Business Design Centre this weekend.

Their penultimate challenge required them to work with a design agency to develop a company name, identity, business card design, posters, leaflets and flyers for their home staging business which will be open for business on Sunday at the show!

Yesterday afternoon at 3pm our two teams of contestants were taken to the exhibition and given their brief. They need to dress the stand, have their brand and marketing collateral in place and be ready for business all within a three-day turn-around and with only £900 in which to achieve all of this!

The two film crews arrived at 7:30am this morning to set up the lighting and to run sound checks. Cliff arrived shortly thereafter for a briefing with the Producers and the Director. At 9am sharp the contestants briefed both of us on what they were hoping to achieve in terms of the branding and how they wished to spend their money. Last night the contestants developed a mood-board and their basic copy and then it was over to us!

Fast forward to 11am and we were briefing the studio on what the two teams wanted. Thankfully, they had an understanding of what could be achieved with the budget and the time that we had available so we had no crazy ‘you must be joking’ feats of design demanded of us. (As if it wasn’t enough already!)

Panic descended like monsoon rain and before long we had made a really good start. The teams left us to get on with our feat of folding space and time to produce a brand and returned again at 4pm to review our design concepts.

At Firedog we fully believe in a wee bit of healthy competition and the process of natural selection. Cliff had his team (team B) and I managed team A. Admittedly, team A is feeling pretty confident and I reckon we’re going to get one up on Cliff’s team on Sunday! Our brand is looking good (nice work Ala!), our message is clear and hopefully (hope, hope!!) our pricing strategy is spot on for Sunday!

We’re about to hit a pub for a well deserved pint after today’s shenanigans. And after all of this what did we learn about ourselves?

Well, we learnt that we can produce amazing work on a limited budget and within a very limited time-frame. But hang on, that’s something we’ve know for ages.

Watch out the next instalment on Monday. We’ll take a few pics for our porti and the next blog article.