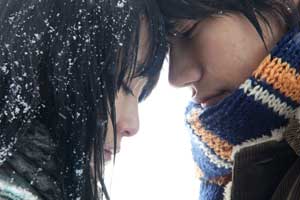 Don’t Panic are running a competition on the site for budding designers to come up with a new poster for Norwegian Wood’s March 11 UK release. The music was written by Radiohead guitarist Jonny Greenwood and the film stars Oscar-nominated Japanese actress Rinko Kikuchi. And, based on the 1987 Japanese novel of the same name by Haruki Murakami, it’s billed as “a story of love and heartbreak in a time of global instability.”

The top 10 posters will be shown at London’s Curzon Soho gallery from March 4-25. The winner will be chosen by a panel that includes director Trần Anh Hùng, Curzon Soho and well-known film poster designers All City.

Other prizes for the winning poster include: a signed Norwegian Wood poster, a Murakami library, a CD soundtrack, a limited edition Stanley Donwood print and the chance to have your artwork distributed in Don’t Panic packs nationwide.

The competition closes February 28. For more info and entry guidelines, go to: http://www.dontpaniconline.com/designbrief/norwegian_wood