Death of the Hipster?

Once hailed as pioneers for subverting the norm and challenging the status quo, are Alan Ginsberg’s “angel headed hipsters” now in jeopardy? When their trademark skinny-jeaned, thick-rimmed glasses and over-sized jumper image is repeatedly reflected in the shiny windows of mainstream labels like H&M, ASOS and Primark, it’s looking that way. Does this commercialisation result in some form of dilution and, if so, are the “original” hipsters a dying breed? 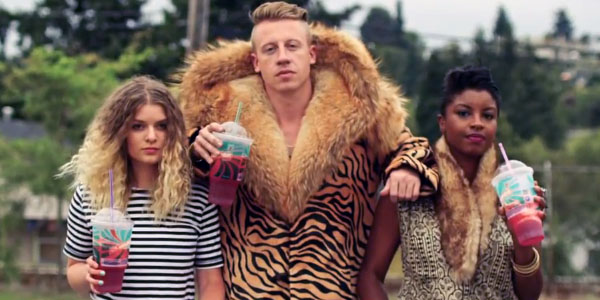 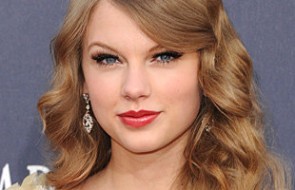 This commercialisation was made even more apparent as chart-topper Taylor Swift sings that it “seems like the perfect night to dress up like hipsters” in her recent song “22”. And if Swift, an artist reputed for her throwaway pop music is associating hipsters with fancy dress, things aren’t looking great…

Coined in the 1940s, the term “hipster” referred to someone “in the know.”

Notably, a key characteristic of the movement was a rejection of materialism. In 1982, Ginsberg published a summary of the “essential effects” of the Beat Generation, amongst which he noted a “spiritual liberation.” But with the progression from Beat to beatnik, Kerouac feared this spiritual aspect had been lost. Beatniks were generally considered to display the superficial aspects of the Beat Generation movement; some even criticised them as inauthentic posers. 50 years later, where does the hipster stand? 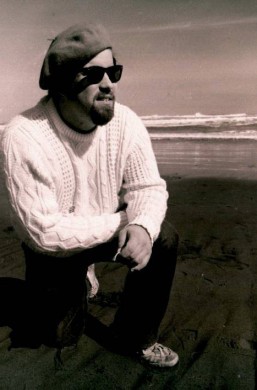 Compare the beatnik stereotype to that of a hipster. One has a goatee and wears a beret, recites nonsensical poetry and plays bongo drums. The other also embraces facial hair (though this probably takes the form of a full beard or  moustache), recites profound passages from “The Dharma Bums” whilst smoking a Galoise cigarette, and occasionally strums an acoustic guitar. The resemblance is undeniably strong. When Kerouac optimistically asserted, “woe unto those who spit on the Beat Generation, the wind’ll blow it back”, was he wrong? Has the Beat Generation, a movement that combined both  philosophy and style, in fact regressed to a trend that only addresses the later while feigning interest in the former? Has desperation to look the part and imitate a certain lifestyle obliterated the need to express a genuinely valid and informed opinion?

When Kerouac optimistically asserted, “woe unto those  who spit on the Beat Generation, the wind’ll blow it back”, was he wrong? 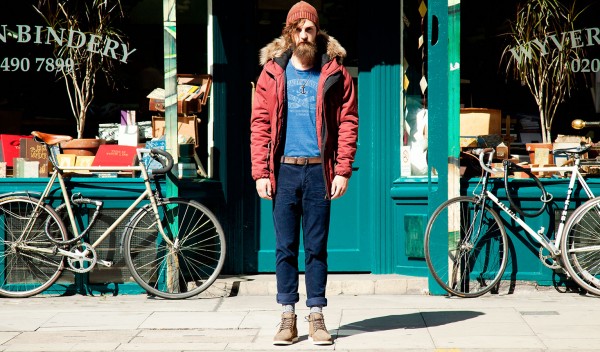 Nowadays, being “in the know” largely equates to keeping up with the latest trends. And while back in the 50s this may have applied to a select minority, “original” and “wannabe” have now become indistinguishable, merged together within the space of a few tweets and instagrams. Drinking organic coffee in an independent cafe, growing your own food, or wearing your grandparents’ clothes feature amongst these current trends. If you participate in any of the above, you’ll probably be labelled a hipster. So, when both style and lifestyle are so easy to assimilate, is a new, more accessible subculture emerging? Or, perceived as overdone and thoroughly unoriginal, has this culture already reached its peak? 2013 saw Google search statistics for the word “hipster” reach an all-time high. Like all trends, surely the evident popularity and exposure of this word guarantees an inevitable demise?http://www.google.com/trends/explore#q=hipster 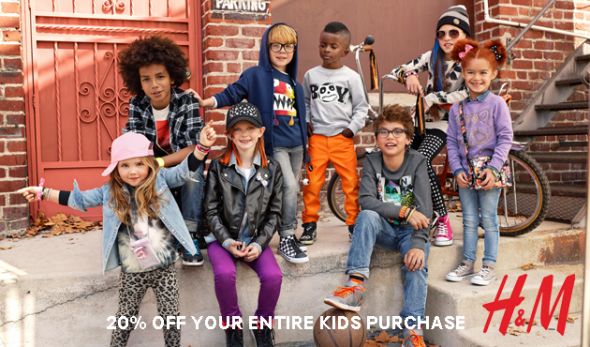 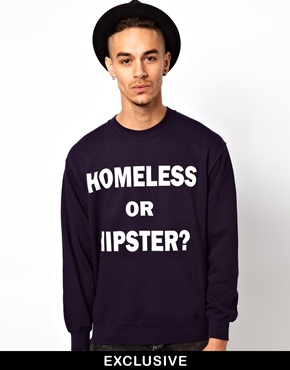 My favourite find was ASOS’ “reclaimed vintage sweat” with the clever strapline “Homeless or Hipster?” While pretty much anything with the word “Vintage” in it at the moment will be clicked straight into your online basket, ASOS also got the strapline just right. Research on hipsters posited a sense of ironic wit as a key characteristic. Veering on the edge of controversy and obviously only to be worn in an “ironic” sense, this jumper is a must-have for the hipster wardrobe. Clearly, the purchaser would consider himself (or even herself) poles apart from the pavement-sitting, beard-growing hipster. But secretly, they wonder whether they would suit a moustache, after all…

With its new interactive map, Yelp has now made it even easier to follow the path of hipsters. Typing the word “hipster” into this map reveals the hottest spots in London to hang out in – or avoid. The most hipster-populated area? Of course it was Shoreditch. 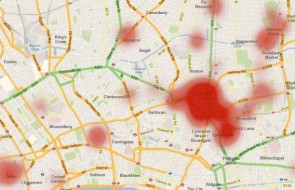 The most hipster-populated area? Of course it was Shoreditch.

Delving into the area’s history, this is not altogether unsurprising. The area has always had an artistic edge: England’s first playhouse was built here in 1576, with Shakespeare’s plays regularly performed at the venue and Christopher Marlowe living at the end of the high street. 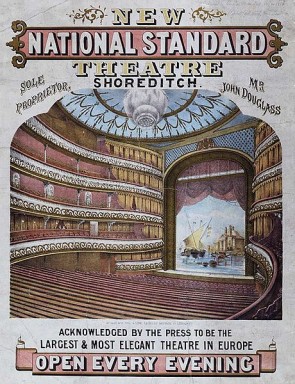 Raucous from the offset, a description from the time deems Shoreditch to be an area housing a “great number of dissolute, loose and insolent people.” Has a lot changed, then? Regardless of its long-standing reputation for crime, prostitution and poverty, Shoreditch rivalled the West-End as London’s centre of entertainment. Years later, and artist Damien Hirst was a key figure in the re-definition of Shoreditch’s art scene in the 80s and 90s. Its walls brightly clad in graffiti almost everywhere you look, the area undoubtedly remains a place to which artsy types flock. With this in mind, we headed out into the streets of Shoreditch to ask the locals how they perceive this stereotype and whether they think the “end is nigh” for the hipster. Raucous from the offset, Shoreditch housed a “great number of dissolute, loose and insolent people.” 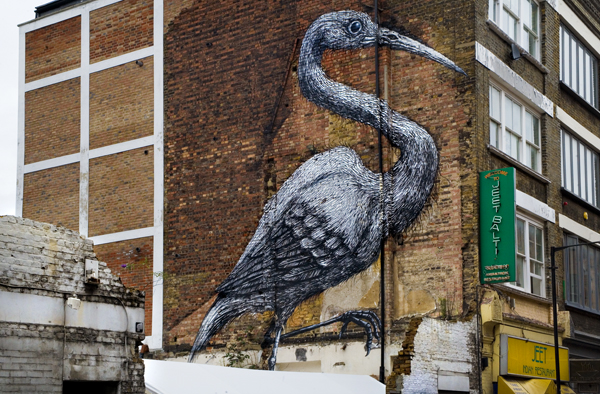 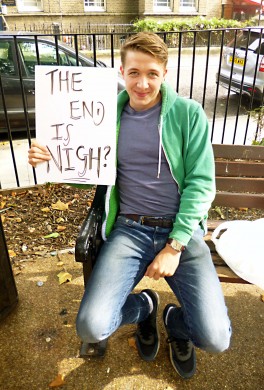 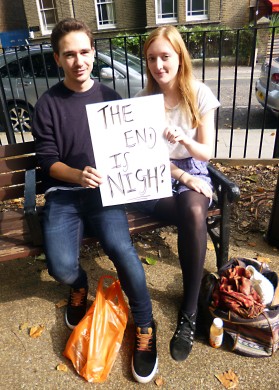 When asking this couple whether they would consider themselves hipsters, they swiftly replied “I hope not!” the man adding: “It’s not a good image to be associated with, even if I am actually a hipster.” Despite associating hipsters with “trendy people”, the couple perceived the hipster image as increasingly mainstream, and thus unoriginal and un-cool. They too agreed that the word “hipster” is ultimately more about image than anything else.

Another couple of bearded, pavement-sitting guys said they wouldn’t describe “hipster” as a scene but “more like a borrowed scene for people who dress like they’re living in the 80s when they were probably born in ’95.” To them, the word “hipster” had a very vacuous connotation and was not something they wanted to be compared to.

The couple perceived the hipster image as increasingly mainstream, and thus unoriginal and un-cool. 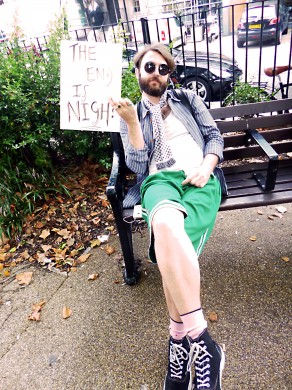 It wasn’t all doom and gloom for the hipster, though. This man was flying the flag high, not only admitting to being a hipster, but arguing that “the trend is getting more popular and this is a good thing.”  His initial reaction to the word “hipster” was someone who wears “different materials – metal rings and varied patterned fabrics in bright colours.”

Everyone we asked outlined fashion as a primary connotation of the word “hipster”. In fact, this was pretty much the only association. However, trying a different tack, we asked locals we deemed to be hipsters to give us their reactions to holding the sign “The End is Nigh?”, without being told anything more. A variety of imaginative replies suggests that Kerouac’s people of “a special spirituality” continue to rise and roam Shoreditch. For how long, who knows? The beatnik trend survived around 15 years before fading into the mists of history. With this in mind, maybe tonight really is just the perfect night to celebrate and dress up like hipsters. In the words of Hunter S. Thompson – which I’m sure hipsters nationwide will derive inspiration from – “Hopes rise and dreams flicker and die. Love plans for tomorrow and loneliness thinks of yesterday. Life is beautiful and living is pain.” Let’s embrace it while it lasts, then. 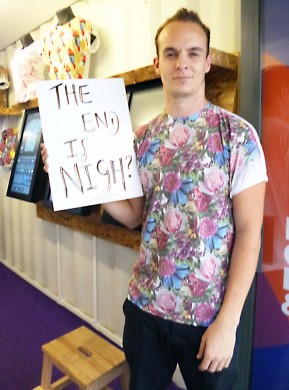 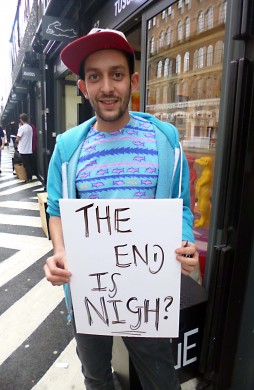 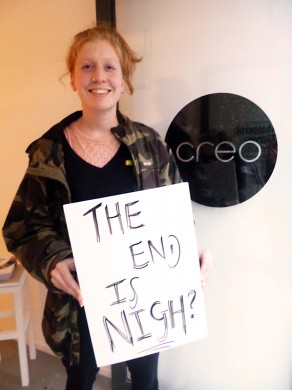 “I don’t believe it. New developments are continually making the future a brighter place. Maybe the past is nigh but the end is not coming.”

Previous Article London Design Festival 2013: Our Favourites
Next Article What We’ve Been Talking About…