New (artiste) kids on the block 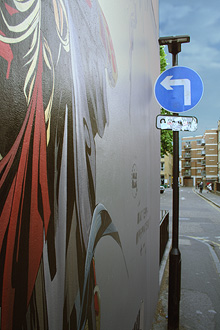 Well, we’ve just completed our move to trendy art and design hub Hoxton Square and all went really well, all things considered. Office moves can be quite a nightmare as you may know. We only really had a few hiccups – I think the most embarrassing being the van we hired from Sixt which essentially had an absolutely knackered engine which spewed vast clouds of noxious fumes at the slightest provocation. Not good for a cyclist such as myself – poisoning my fellow kerb huggers and receiving understandable abuse…Why have we moved? Well for starters – daylight. We’ve been a bunch of design slugs for the past few years nesting under the soggy rock which was the Soho firedog office. Not that I’m dissing it at all, it’s just that we’ve come to realise how important natural sun and light can be in terms of the human spirit. Everyone is far chirpier these days and our skin promises to turn from grey to,.. well a warmer shade of grey.

The second reason for the move is square footage and we now have a bit more of it thanks to two stories of prime media space. Downstairs we have the suits one side and the creatives the other (even more of a partition so the sounds of phone calls and self scalpel mutilation are more drowned out, result) and upstairs both a boardroom and what we plan to be a chill out room for those more informal meetings. We also have a nice roof terrace with which we plan to herald the remaining summer this year. So next time you need an excuse to leave your air-conditioned, dry walled partitioned modern day office, take a trip to the dogs on Hoxton Square.