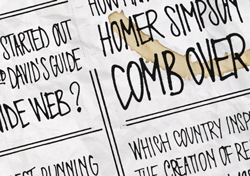 It’s the time of year for catching up, being festive and getting a bit competitive.

There’s no better way to test your knowledge than by organising your very own pub quiz – it’ll keep you all entertained (or struggling for answers) for hours! We’ve provided the questions and answers, you just need to provide pens, paper and a few festive treats.

Q: Dennis Hwang is the Google Doodler and creator of many of the memorable Google logo adaptations on special days. What is his full time role at Google?
A: Webmaster

Q: Who is the legendary chief of design behind much of Apple’s good fortune?
A: Jonathan Ives

Q: Who is the original designer of the IBM logo?
A: Paul Rand

Q: What was the cost of the original Nike Logo?
A: 35 dollars

Q: Which French label features an alligator as its brand mark:
A: Lacoste

Q: What is Madonna’s real surname by birth?
A: Ciccone

Q: Who is the illustrator behind the Monty Python’s flying circus quirky visual language?
A: Terry Gilliam

Q: Which search engine started out being called “Jerry and David’s guide to the world wide web”
A: Yahoo

Q: What does the http stand for in a web address URL?
A: Hyper-Text Transfer Protocol

Q: Which city houses the Sagrada Familia?
A: Barcelona

Q: What is the birth place of the contemporary architect, Zaha Hadid
A: Baghdad, Iraq

Q. Who is the director behind the 1979 classic, Apocalypse Now?
A. Francis Ford Coppola

Q. How many hairs make up Homer Simpson’s comb over
A. Two

Q. Which animated cartoon character became the first actor to be awarded a star on the Hollywood walk of fame?
A. Mickey Mouse

Q. Which car is the longest-running and most-manufactured automobile of a single design?
A. Volkswagen Beetle

Q. What was the name of Apple’s first attempt at a ‘Personal Digital Assistant’, with a handheld device designed in 1987?
A. Apple Newton

Q. Which country inspired the creation of Red Bull, formulated in 1987 by Austrian entrepreneur, Dietrich Mateschitz?
A: Thailand

Q. Which company registered the very first trademark in the UK, featuring a red triangular emblem?
A. The Bass & Co Brewery